"Günther XXI von Schwarzburg (1304 – 14 June 1349), King of Germany, was a descendant of the counts of Schwarzburg and the younger son of Henry VII, Count of Schwarzburg-Blankenburg.

He distinguished himself as a soldier, and rendered good service to the Emperor Louis IV on whose death in 1347 he was offered the German throne, after it had been refused by Edward III of England. He was elected German king at Frankfurt on 30 January 1349 by four of the electors, who were partisans of the house of Wittelsbach and opponents of Charles of Luxemburg, afterwards the Emperor Charles IV.

Charles, however, won over many of Gunther´s adherents and defeated him at Eltville, and Günther, who was now seriously ill, renounced his claims for the sum of 20,001 marks of silver. He died three weeks afterwards at Frankfurt and was buried in the cathedral of that city, where the headstone (a masterpiece of gothic art) was erected to his memory in 1352." - (en.wikipedia.org 12.01.2020) 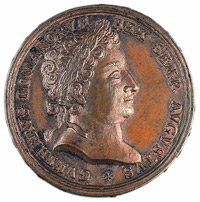