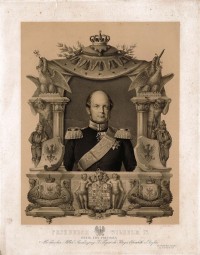 "Frederick William IV (German: Friedrich Wilhelm IV.; 15 October 1795 – 2 January 1861), the eldest son and successor of Frederick William III of Prussia, reigned as King of Prussia from 7 June 1840 to his death. Also referred to as the "romanticist on the throne", he is best remembered for the many buildings he had constructed in Berlin and Potsdam, as well as for the completion of the Gothic Cologne Cathedral.

In politics, he was a conservative, who initially pursued a moderate policy of easing press censorship and reconciling with the Catholic population of the kingdom. During the German revolutions of 1848–1849, he at first accommodated the revolutionaries but rejected the title of Emperor of the Germans offered by the Frankfurt Parliament in 1849 as not the Parliament´s to give and used military force to crush the revolutionaries throughout the German Confederation. From 1849 onward he converted Prussia into a constitutional monarchy and acquired the port of Wilhelmshaven in the Jade Treaty of 1853." - (en.wikipedia.org 01.11.2019) 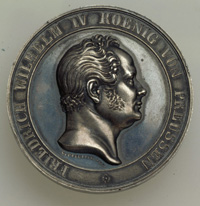 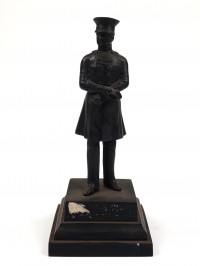 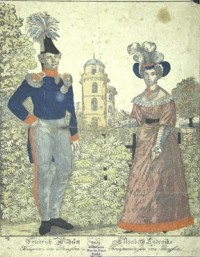