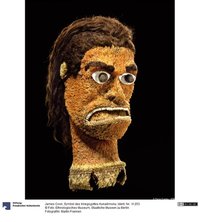 "In Hawaiian mythology, Kū or Kūkaʻilimoku is one of the four great gods. The other three are Kanaloa, Kāne, and Lono.

Feathered god images or ʻaumakua hulu manu are considered to represent Kū. Kū is worshipped under many names, including Kū-ka-ili-moku (also written Kūkaʻilimoku), the "Snatcher of Land". Kūkaʻilimoku rituals included human sacrifice, which was not part of the worship of other gods." - (en.wikipedia.org 14.11.2019)