"Heinrich Balduin Möllhausen (27 January 1825—28 May 1905) was a German writer, traveler and artist who visited the United States and participated in three separate expeditions exploring the American frontier. After his travel he became a popular and prolific author of adventure stories based on his experiences in America. It is estimated that he produced at least forty-five large works in 157 volumes and eighty novelettes in twenty-one volumes. His popularity and subject matter earned him recognition as the German Fenimore Cooper." - (en.wikipedia.org 09.11.2019) 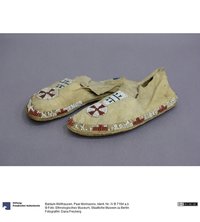