"Kraft durch Freude (German for Strength through Joy, abbreviated KdF) was a state-operated leisure organization in Nazi Germany. It was a part of the German Labour Front (Deutsche Arbeitsfront, DAF), the national German labour organization at that time. Set up as a tool to promote the advantages of National Socialism to the people, it had become the world´s largest tourism operator by the 1930s.

KdF was supposed to bridge the class divide by making middle-class leisure activities available to the masses.

It also sought to bolster the German tourist industry, something it did successfully up until the outbreak of World War II. By 1934, over two million Germans had participated in a KdF trip; by 1939 the reported numbers lay around 25 million people.[citation needed] With the outbreak of war in 1939, the organization was mothballed, and several projects, such as the Prora holiday resort, were never completed." - (en.wikipedia.org 29.01.2020) 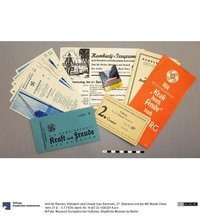