"Carl Heins (8 June 1859 - 10 September 1923) was a German pianist, and a composer of light salon music in classical music style. He wrote both solo piano works and parlor songs.

Heins´ pieces show a special pianoesque ability to fashion pretty melodies picturesquely in the salon style of the time. His competency on the keyboard led him to perform and compose. He composed the song ´Zwei Dunkle Augen´, which was recorded by the tenor Fritz Wunderlich. Stylistically his music is similar to that of his older compatriot Carl Bohm.

Robert Leonhardt, an operatic baritone who sang with the New York Metropolitan Opera company between 1913 and 1922, made numerous recordings for many major record labels, both in Europe and in the United States. An early recording he made on Gramophone 42325 with matrix number 1113B was "Zwei dunkle Augen" by Carl Heins. Leonhardt recorded it onto a 78rpm on October 1901 when he was 24." - (en.wikipedia.org 30.01.2020) 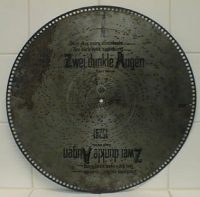