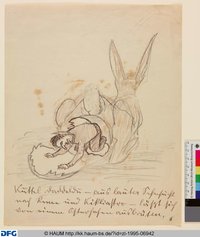 "Joachim Ringelnatz is the pen name of the German author and painter Hans Bötticher(7 August 1883, Wurzen, Saxony – 17 November 1934, Berlin). His pen name Ringelnatz is usually explained as a dialect expression for an animal, possibly a variant of Ringelnatter, German for Grass Snake or more probably the seahorse for winding ("ringeln") its tail around objects. Seahorse is called Ringelnass (nass = wet) by mariners to whom he felt belonging. He was a sailor in his youth and spent the First World War in the Navy on a minesweeper. In the 1920s and 1930s, he worked as a Kabarettist, i.e., a kind of satirical stand-up comedian. He is best known for his wry poems, often using word play and sometimes bordering on nonsense poetry. Some of these are similar to Christian Morgenstern´s, but often more satirical in tone and occasionally subversive. His most popular creation is the anarchic sailor Kuddel Daddeldu with his drunken antics and disdain for authority." - (en.wikipedia.org 30.01.2020) 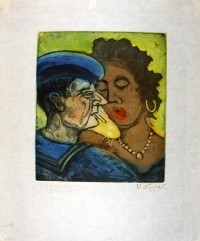