A group of card-players have started quarrelling outside a country inn. Playing-cards, a backgammon set and a pewter tankard have fallen to the floor.The figures are designed carefully, with a degree of painterly refinement, but their surroundings are approached in a somewhat cursory fashion. This kind of picture goes back to Jan Steen’s teacher Adriaen van Ostade and beyond him to Adriaen Brouwer and Pieter Bruegel the Elder. The composition is held together primarily by the element of movement, exaggerated gestures and facial expressions that are typical of Steen’s late style, rather than by three-dimensional structure. Another typical feature is that his later work tends to be larger and more monumental, which can be traced back to Jacob Jordaens’s influence. Many of Steen’s genre paintings are inclined to rather heavy moralising, the intent being to illustrate poor conduct. The quarrelling men are an embodiment of Ire, one of the seven deadly sins, or Discordia as a result of addiction to gambling and alcohol. This was a common and traditional subject-matter for painting, and its symbols were familiar to all. Certainly the moral lesson is presented to the viewer with stage-like theatricality. The furious man with his sword drawn is reminiscent of Capitano, the anti-hero of the commedia dell’arte. In order to emphasise the narrative content of the scene, Steen often drew on contemporary theatre for his pictorial vocabulary and composition. 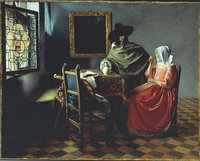